The Vandalia CAG was reorganized to expand representation in the community and revisit some steps in the alternative development and evaluation process. The reorganized CAG is referred to as the VCAG, in order to differentiate between the original CAG.

The first step in the Project Process is to identify transportation problems and community issues. IDOT can identify a transportation problem by collecting and analyzing data, but a community’s issues are best heard from the community themselves. The first Citizen’s Advisory Group (CAG) meeting got people thinking and talking about transportation issues in their communities by posing the question, “What problems do you foresee by expanding US 51 to four lanes in your community?” Aerial photographs of the new bypass around Moweaqua were on hand to lend inspiration to exercise. Existing problems with US 51 and future benefits of an improvement were touched on as the groups debated their answers to the question. The ideas shared by the CAG #1 participants were recorded and are available here.

The next step in the Project Process is to try and understand what is important to a community. The characteristics that make a community unique are best identified by its residents. Representing a cross section of their neighbors, Citizen’s Advisory Group members took a survey at CAG #2 to help IDOT better understand the context of their community. Participants taking the survey were given the opportunity to prioritize what characteristics in the survey they believe are most important to their community. Although each community’s context is different, a passion for maintaining and improving the quality of life along the US 51 corridor was evident in each group. The results of Vandalia’s Context Survey can be viewed here. Culture Exhibits and Location Maps and are available below:

Click here for a blank copy of the survey distributed at the meetings.

The last step in the Project Process before defining and analyzing alternatives is to define a Problem Statement. The Problem Statement will be referred to throughout the rest of the project. The first measure as to whether an alternative should be studied is, “Does this solve the problem statement?” If yes, the alternative will be considered. IDOT’s problem with US 51 starts with continuity and connectivity. If people, goods and services cannot efficient get to where they need to go, problems also develop with economic development potential and safety. Using IDOT’s problem as a starting point, at CAG #3 each group tailored a statement that was specific to their problems of continuity, connectivity, economic development, and safety.

Prior to beginning the brainstorming of possible locations for corridors, members of the CAGs were presented with a series of preliminary criteria that engineers, planners, and scientists use when beginning to identify possible locations for a transportation improvement. The information presented as Engineering 101 and Environmental 101 was to be considered when the groups brainstormed ideas. The ideas developed at CAG #4 in addition to those added by the RAG and PSG were complied on one drawing and will be the starting point for the refinement of alternatives at CAG #5. 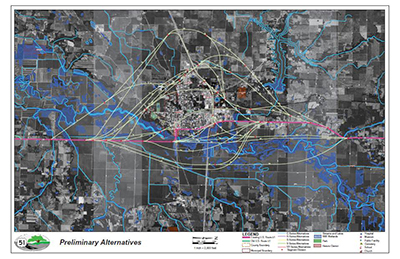 The fifth set of CAG meetings were held in late February and early March, 2009. The purpose of these meetings was to review the range of preliminary corridors for US 51 developed and eliminate or consolidate corridors that did not meet the project Purpose and Need. The range of alternatives included the ideas brainstormed at CAG #4 in addition to corridor options added by the Regional Advisory Group (at RAG #2) and by the Project Study Group (PSG). Prior to beginning the review of corridors, the project study team reviewed the alternative analysis process and design criteria. The design criteria presented was similar to the information presented at CAG #4 but focused in more detail on specific roadway design elements. The corridors selected by the CAG for further evaluation will be reviewed by the RAG and PSG; additional corridors may be added by the by these groups to ensure that a reasonable range meeting the project Purpose & Need is evaluated. The corridors will undergo a rigorous evaluation by the engineering team that will consider environmental, cultural, community, agricultural, historical and operational impacts. At this time, each of the corridors under consideration is 500’ wide. A narrower roadway alignment will be determined inside the 500’ corridor later in the project.

Click on the links below to view the agenda and handouts from the meeting. To view the range of corridors reviewed at CAG #5, see the exhibits from CAG #4. The corridors still under consideration after CAG #5 were refined and presented for review at CAG #6. See below.

After brainstorming at CAG #4 and consolidating and eliminating at CAG #5, the committee members were given the opportunity to review the corridors that are being studied further. Some of the corridors that were developed and refined through the previous CAG, RAG, and PSG meetings were modified or combined by the project team if they met the same intent as a similar corridor (or corridors), had the same beginning and end points, and were located in the same general area. Corridors that did not meet the Project’s Purpose & Need (to improve connectivity and continuity) were eliminated from further consideration. From these efforts, a reasonable range of corridors was identified to forward to the FHWA for additional input and can be seen in the exhibits from CAG #6 (link below). The next step in the process was to develop preliminary roadway alignments within the corridors still under consideration and present them at Public Information Meeting #3. 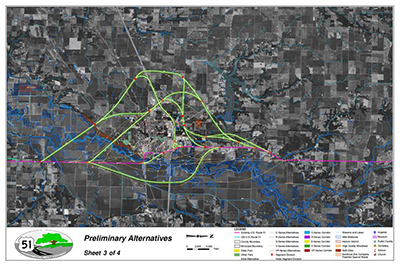 In December 2009 the project team received additional information from the Illinois Natural History Survey (INHS) which identified high-quality wetland areas along the bypass corridors around Centralia/Central City, Sandoval, Patoka, Vernon, and Vandalia. In light of this new data, the project team modified some of the preliminary corridors to avoid impacting these high quality wetland areas. Exhibits of the modified corridors were presented during CAG #7 to solicit input from committee members.

As a result of CAG #7, the project team developed alignments to fit within the modified corridors. These alignments were presented this spring at Public Information Meeting #4. Comments received from PIM #4 were taken into consideration as the project team asked for concurrence to move forward with recommended corridors from the Federal Highway Administration (FHWA) in June 2010. An exhibit depicting the revised corridors can be seen below. 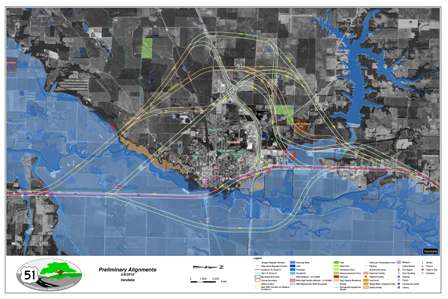 In addition to stating their interest area, volunteers placed a sticker indicating where they live on a large aerial map of Vandalia. The purpose of this activity was to ensure that a diverse geographic area within and around Vandalia was represented by the members.

The attendees discussed any additional interest areas or geographic areas they thought should have representation on the VCAG. Several suggestions were provided. After the meeting, representatives from these suggested areas were identified and invited to join the VCAG.

At VCAG #2, the VCAG members brainstormed preliminary alignment locations on an aerial photograph of the Vandalia area. The project team asked the CAG members to keep the focus question “What is best for the City of Vandalia” in mind when developing alignments. The members were instructed that for this exercise, there are no constraints (engineering or environmental) of where the alignments can be located.

The members then formed small groups and discussed their individual ideas with the group. Members had many common ideas and the small group ideas were transferred to a single aerial. The small group’s ideas were shared with the entire group and documented on one large aerial map. The VCAG members reviewed the map as a group. The project team asked the VCAG members if all of their original brainstormed ideas were represented on the map. If not, they were asked to add their ideas to the large map. The VCAG came to a consensus at the end of the meeting that their ideas were captured on the map, and all alignments that the engineering team should perform a preliminary evaluation on, for discussion at the next VCAG meeting.

Prior to this meeting, the project team electronically documented the ideas that were hand drawn on aerial photographs by the VCAG members during VCAG #2. These alternatives were displayed at VCAG #3 and reviewed by the VCAG members. The alignments were grouped based upon similar intent or variation on a similar idea. The groups included the western bypasses, eastern bypasses and through town alignments, dual marking US 51 with I-70 (putting US 51 traffic on I-70), and alignments parallel to I-70. VCAG members agreed that the alignments they drew at the VCAG #2 meeting were accurately reproduced and that no additional alignments should be considered.

During the discussion, the VCAG members discussed the alignments in regard to the focus question presented at VCAG #2: “What is best for the City of Vandalia?” The VCAG reached consensus to remove several alternatives from further consideration. At the end of the VCAG meeting, the project team displayed the 12 remaining alignments that the VCAG agreed should be kept for further consideration. The VCAG came to a consensus that the project team should study these alignments in greater detail for discussion at the next VCAG meeting.

During the course of VCAG# 4, the VCAG selected one alignment from each alignment group (the groups consisted of western bypasses, eastern and through town alignments, dual marking US 51 with I-70, and alignments parallel to I-70). In addition to one alignment from each of the four groups, Vandalia S and U, which were developed by the original CAG, were still under consideration. Although Vandalia S & U were not selected by the reformed VCAG, the alignments were developed by the original CAG, and the project team received concurrence from the FHWA in June 2010 to study these alignments further.

These six alignments were evaluated at the next VCAG meeting based upon their impacts on the natural and social environment.

The six alignments were presented at a Public Information Meeting (PIM) on November 23, 2010. Read more about that meeting here.

At VCAG #6, the project team discussed environmental and community resource updates. The Vandalia Public Information Meeting (PIM), held in November, 2010, was discussed. A summary of the public comments received after the PIM was presented. The next steps in the process were discussed, including the NEPA/404 merger meeting and the detailed evaluation of alternatives in the Draft Environmental Impact Statement (DEIS).

The exhibit and meeting notes are available in the documents section.

At VCAG # 7, held on July 20, 2011, the project team presented the refined alignments, including interchange design and proposed access locations. The project team encouraged the VCAG members to provide input on the alignments and access locations.
These alignments were presented at the Pubic Information Meetings held in July, 2011. To read more about the July meetings and to see the refined alignments click here.
The exhibits and meeting notes from VCAG #7 are available in the documents section.

The project team modified the remaining Vandalia alternatives after VCAG Meeting #7. Specifically, the proposed interchange designs were simplified due in part to input received from previous VCAG meetings and in order to minimize impacts. The modifications were presented at VCAG Meeting #8. The VCAG members were asked to provide input on the modifications.

The handouts, exhibits, and comment form distributed during the meeting are available in the documents section.